CMPD is still on the hunt for Cordero Emanuel Ardrey who is wanted for the murder of 34-year-old Horace McCorey ten days ago. 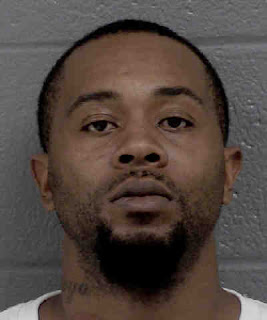 Cordero Emanuel Ardrey Photo MCSO
Police are still asking for the community's help locating Ardrey who is wanted in connection to the homicide of the 34-year-old man, who was fatally shot outside a north Charlotte lounge early Saturday morning June 11, 2021.
Six weeks prior to shooting Horace McCorey to death, CMPD had arrested Ardrey.
On April 29, 2021 Ardery was charged with:
POSSESSION OF FIREARM BY FELON
POSSESS STOLEN FIREARM
PWIMSD SCH II CS
POSSESS DRUG PARAPHERNALIA
FELONY POSSESSION OF COCAINE
He was booked into the Mecklenburg County Jail at 8:03 AM the next morning and released that evening at 11:38 PM without bail despite prior convictions for:
ARMED ROBBERY 05/05/2007
B & E VEHICLES (PRINCIPAL) 07/30/2008
LARCENY OF FIREARMS (PRINCIPAL) 07/29/2008
B & E VEHICLES (PRINCIPAL) 07/29/2008
LARCENY (PRINCIPAL) 07/29/2008
B & E VEHICLES (PRINCIPAL) 04/26/2008
LARCENY OF FIREARMS (PRINCIPAL) 07/29/2008
ASSAULT ON FEMALE (PRINCIPAL)  07/22/2014
And despite a more than 1/2 of dozen outstanding traffic citations for:
NO OPERATORS LICENSE - NC SHP
SPEEDING - NC SHP
OPERATE VEH NO INS - NC SHP
FICT/ALT TITLE/REG CARD/TAG - NC SHP
DRIVE/ALLOW MV NO REGISTRATION - CMPD
OPERATE VEH NO INS - CMPD
RECKLESS DRIVING TO ENDANGER - CMPD
The conditions of Ardrey's release and dozens of other violent felons are set by Mecklenburg County Magistrates who are appointed by Chief Distract Court Judge Elizabeth T. Trosch.
Judge Trosch who succeeded Chief District Court Judge Regan A. Miller last year, is continuing his liberal "no bail" policy for minorities.
At the Chief Judge's direction Mecklenburg County Magistrates continually release violent felons with little or no bail requirements and the results are predictable.
Ardrey is one of more than two dozen violent felons released in the last two years while awaiting trial via this continuing NO BAIL policy who have committed murders and other violent crimes.
Ardrey is still on the run. CMPD's VCAT has been unsuccessful in locating Ardrey despite several leads.  He should be considered armed and dangerous," CMPD said. "Anyone who sees Ardrey or knows his whereabouts is asked to call 9-1-1, immediately."
CMPD said an investigation into the murder of Horace McCorey remains active and ongoing investigation, and anyone with information about the case is asked to call Crime Stoppers at 704-334-1600.
Cedar's Take: Make no mistake Horace McCorey was no angel, in fact he too was out a no cash bail awaiting trial on several weapons and robbery charges. His prior convictions on weapons charges including possessing a weapon of mass destruction resulted in only probation.
Posted by Cedar Posts at 8:09 AM

Democrat's "Bail Reform" is a unmigrated disaster. As someone who has read Judge Regan Miller's Bail Order it is insane that Trosch has not rescinded that order. She needs to be removed from office.

Can we all just focus on the most pressing issue at the moment….we have been invited to learn how to put the unity back into community. No one has signed up so Lts and above are being forced to go and sit in on that dumb info session, JJ will be so happy see so many eager and willing gold badges sitting there taking notes.

And when will we see the new uniforms we are being forced to wear? Will we be made to wear shiny boots too?

This all stinks to me. look at all those petty traffic violations. This man has likely been targeted by racist police. Something I learned back in NJ, way back during the Patterson riots, there is always something causing folks to lose their minds temporarily. back then it was lack of recreation facilities, escalating rent, and unfair treatment by landlords.

Charlotte can learn a lot from those lessons and expand the rec facilities, stop the corporate landlords from unfair evictions, and put in rent controls or at least some affordable housing.

Patterson had bumps in the road, but had we followed those steps, it would have been the wonderful place we have today, a lot sooner. These guys just need a chance before this targeting intervention by law enforcement.

Sure maybe if we had a rec basket ball league he wouldn't have tried to rob an equally disgusting human being and shot him 8 times.

Remember these crimes are only the ones when he got caught.

Legit question why is concealed weapon only a misdemeanor?

Patterson New Jersey oh hell no! You can have those Black shit holes.

Paterson, NJ has a lower crime rate than Charlotte. Slightly higher violent crime, way lower property crime. Our experience up there is, you give people rec opportunities and a chance to rehabilitate, and they don't commit property crimes. I chalk the violent crime up to the worse winter weather, overall racial oppression, and not having affordable adequate child care.

If we can bring the best of Paterson, and all of Jersey, down here, Charlotte can get their issues fixed. I liked having our children in schools with 11:1 teacher ratios. It was nice being able to walk to everything you need. If it's not close, the bus can take you there. Have you tried catching a bus on Eastway when it is 95 out? No thank you! I only made that mistake once.

Make those landlords pay their township taxes, and put that money to good use in the community.

I say let em all out of jail and let them have at it. They single handedly are doing more to curb violent crime in the city by snuffing each other out and meanwhile saving tax payers the bill for 3 hots and a cot. No big losses here, no BLM marches, no murals, no lawsuits, or whitey did it speeches....

Let’s celebrate putting the unity back in commUNITY.
Cmon y’all, it will be fun but remember, say my pleasure at the end of every encounter and smile.

While we are all putting the "Unity" in Community the Hood Rats are busy putting the "Hoot" in Shoot. Instead of us going to these stupid ass classes why dont they hold them in the neighborhoods for the residents? Why? Because no one would show up.

Remember guys, it's all about customer service and he is a customer!

The POS Vi Lies is following the liberal destroy this city playbook page by page. Glad I moved more and more every day.

Go back to Jersey, you racist, Leftist idiot.