You likely already knew this, after all those who wander over to the CP blog are the smart people.
Back in the day, not long after Alexander Graham Bell perfected the idea of a "talking telegraph" aka telephone, Texas ranchers discovered that "Barbed Wire Fences" worked as a pretty good way make an operational telephone. Even today "twisted pair wires" are still the standard wire via which much of the world communicates.
The following is adapted from a report by W. F. Strong via the Texas Standard which is aired on more than 50 stations across the southwest weekly. 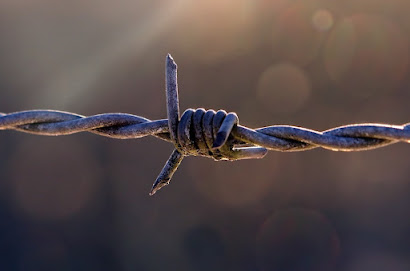 Historian J. Evetts Haley wrote that, in its time, the old XIT Ranch up in the Texas Panhandle was “probably the largest fenced range in the world.” He recalled that its barbed wire enclosed over 3 million acres of land.
At the north end alone, the fence ran for 162 miles.

The unique enclosure helped keep in enormous cattle herds, keep out rustlers, and also gave rise to the creative use of a new technology: the telephone.

We'll come back to the XIT Ranch in a moment, but first, consider these smattering of reports from that era. In 1897, The Electrical Review, reported that “on a ranch in California, telephone communication had been established between the various camps . . . by means of barbed wire fences.”
The article says the novel use of the phone was a great success and was being used in Texas as well. That same year, the New England Journal of Agriculture was impressed that two Kansas farmers, living a mile apart, had attached fine telephone instruments to the barbed wire fence that connects their places and established easy communication.
From the Butte Intermountain in 1902 we see this notice: “Fort Benton’s latest development is a barbed wire telephone communication.” The article points out that people of the range were not all that happy with barbed wire, which they thought was an “evil” that had arrived with the railroad, but they had decided to look at the practical side of its existence and use it to create a telephone exchange that would connect all the ranches to Fort Benton.

On the XIT, given that the ranch covered over 4,500 square miles, there was interest in creating a communication system that would be more efficient than sending out fast riders to distant camps. “In the early 1900’s,” Haley reported, “a great many telephones were placed upon the ranch.
Where possible, the top line of the fences was used as a telephone line, though the ‘service’ was atrocious.” It did allow for quick communication concerning emergencies such as a grass fire that required all cowboys immediately.
There was even talk among technology geeks of the era that cowboys could carry phones wherever they went and clip on to the fence to report problems they encountered.
Haley said that the old cowboys no doubt scoffed at the notion of carrying phones in their saddlebags to squawk about every escaped bull or rattlesnake bite they came across.

The cowboys, always ingenious when it came to invention, perfected the barbed wire phone systems by adding insulators. They’d use old broken whiskey bottles and soda pop bottles – particularly the necks of them — to put under the wire to lift it off the fence and improve conductivity. This made the signal go further and clarified the voices they carried.

The rudimentary phone systems of the ranches led to more creative thinking about rural phone systems in general. Dr. Don Anderson, who has his PhD in electrical engineering from Stanford and is a technological historian, told me that that barbed wire phone systems led to the analogical conclusion that “using whatever is already in place is smart planning.”
So, when rural Texas wanted to extend phone service from town to town, the engineers came up with the idea that they could use the existing rural power lines, already installed by the Rural Electrification Act and run the phone signal right through the electric lines – just at a different frequency. That saved a lot of money and brought phone service along with electricity to rural areas.

Still, many ranches liked their barbed wire systems and kept them, even though the voice quality wasn’t nearly as good. As late as the early 1970’s a dairy farmer I knew had a barbed wire phone running from his house a half mile to the barn. He said it was good for talking to his wife about what time supper was. But most of all he said, “It’s free. I don’t have to pay Ma Bell nothing for that phone, and I enjoy thinking that it’s a burr in their saddle.”

Dr. Anderson noted that it’s quite fascinating to consider that what started as a fence system on the XIT evolved really into what is the XIT Communications which serves that region today. XIT Communications provides phone service and high-speed internet to rural communities in the footprint of the original ranch – and more.
Posted by Cedar Posts at 1:00 AM

Where is booster boy? Are you ready for your fourth shot yet? Fauci says you need it.