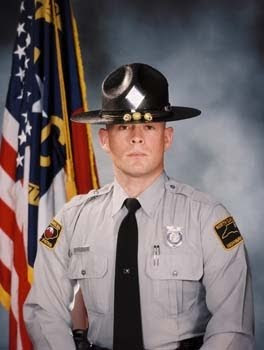 A barbecue fundraiser for Trooper M.J. "Curly" Hastings will be held Wednesday, Dec. 22. Tickets are $8, with additional donations accepted.

One barbecue will take place from 10:30 a.m. to 2 p.m. at Cramer Mountain Country Club. A second barbecue will be on the same day from 4 p.m. to 8 p.m. at the Gastonia City Club on South New Hope Road.

Barbecue can be eaten at the two venues or taken out.

34-year-old Hastings suffered a severe brain injury from a fall while walking down a stairwell December 10th in New York City while attending a social function with other law enforcement officers.

Hastings, a father of two young children who also coaches baseball at Cramerton Middle School, remains on life support and had not regained consciousness as of a week ago. Doctors list his condition as critical and he remains in the intensive care unit at Elmhurst Hospital in Queens.

Thank you for posting this.

Friends and Family of Trooper Hastings

The latest update I hear is Trooper Hastings is trying to wake up. Rumor has it he has been taken off several medications in an attempt to help him do so. He appears to be somewhat conscious in that he can move one hand when his wife is talking to him. She has been with him since day 1 of this tragedy. Now that the children are out of school they will probably be going to New York to visit dad.
The BBQ was great. 8 bucks is nothing to help a brother in need. So dont take your change when paying and you have helped even more.

Thanks for always being there. Our prayers are with you.