CIAA A Different Sort Of Meaning To March Madness

The highlight of Charloote's CIAA Basketball Tournament for the second year in a row has not been the shooting from the 3 point arch but rather a shooting at a club.
The location of this year's shooting was at Lable a part of the Music Factory Uptown.
The shooting occurred as a "day party" was wrapping up around 7 PM, leaving two women slightly injured and seeking treatment at CMC Main.
A video surfaced within moments of the incident:
https://instagram.com/p/zqkOs5EU1O/
Thugs and Hoodrats were sent scurrying sort of to safety sort of....

The club also offered a statement:
"Please be advised that an incident occurred this evening at Label following an event. The exact circumstances concerning the incident have yet to be determined. Officials at Label are cooperating with the Charlotte-Mecklenburg Police Department concerning their investigation of this matter. Tonight’s events at Label will take place as scheduled. It should be noted that there will continue to be very substantial security for all Label events during tournament weekend. And, Label remains fully committed to the safety and security of its patrons."
The race card was immediately delt by local dimwit @kimlawson22

The local minority online publican QCityMetro.com not to be confused with QNotes added this little gem:
Parties around the CIAA tournament and the festivities in and around uptown Charlotte are typically not violent. But last March, two men were shot in the leg during a party that featured music mogul Sean “Diddy” Combs at the Sheraton Hotel. The party took place after the CIAA tournament had ended. It was not a CIAA-sanctioned event but was one of many party venues around the city.
Finally TMZ took the story to a global audience, highlighting the video and Charlotte

Not long after the "double shooting" a "double stabbing" took place at the "Oasis Tent" on College Street. The tent which has long had history of trouble has an interesting yet rumored connection to CMPD.  Officers working the tent and nearby both off duty and on duty assignments have told the tale that there is a standing "no arrest unless approved by CMPD Command" for patrons attending "da tent". Apparently the rumor persists that CMPD's own Vicki Foster has some "skin" in the game, some going as far as saying she's a primary organizer. Efforts to review the "Fire Permit" issued for the Oasis Tent by The Charlotte Fire Department meet an unusual amount of push back.
Cedar's Take: Thank you again CIAA for helping stain the image of my once well behaved southern city.
In other CIAA news, patrons around Charlotte are upset with certain high end venues, clubs, restaurants and parking lots that are adding surcharges, automatic gratuities or charging inflated prices.
The Ritz Carlton took the straight up approach in an effort to persuade the less affluent to move along. 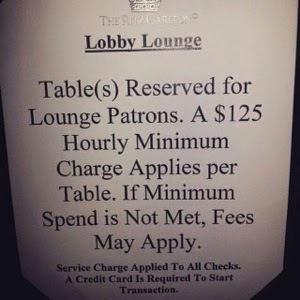 Can't really blame the Ritz, as CIAA patrons are notoriously cheap, often guility of the dine and dash. Parking fees soared some spots the would charge $15.00 for a Hornets game were charging as much as $60.00 for the entire day.

Cedar's Take: Around Charlotte the CIAA crowd seemed smaller than usual this year. At Del Frisco the usual SouthPark crowd dined without the slightest trace of CIAA fans and the prices were just as outrageous as they are every Saturday night I've been there.
Posted by Cedar Posts at 2:01 AM

I think CMPD should have to go through 16 hours of DOJ sponsored "Diversity Training" just like all the cops in SC are having to do for Black Bike Week in Myrtle Beach. Because we all know, that training will keep them from killing each other...

Another racist rant from Cedar Mouth.

Well there's always someone that had to bring up the R word! These are FACTS! Go look at the problems this CIAA garbage brings to town! Always a shooting or something! Let them take there garbage to some other city!!!

Clearly many of you who left comments fail to realize that no CIAA sponsored event has ever had any disruptions or violence. Remember these are college educated fans and their behavior reflects the pride of all CIAA graduates.

The hood? Charlotte doesn't have any hood! Anyone here thinks Charlotte has "the hood" they should try going to Baltimore, Phoenix, Atlanta, Lansing, NOLA, LA, DC, NJ, NY, etc. etc. Charlotte's got baby shit for crime and hood.

Foster is into more junk than you are even hinting at Cedar.

She has ties to everything that goes on with those people of color all kickbacks and paybacks.

Check out the security detail of one certain well known rapper who made a paid appearance Saturday night shortly after a shooting that would have normally closed a club for the night.

Why do you think they were allowed to reopen less than 45 minutes after medic cleared the scene?

Think about it Cedar.

Cedar check out the connection to Woka Faucka Flame and the shooting at Label. It has CMPD written all over it.

No doubt that many of those who come to Charlotte are college hoops fans, but sadly the CIAA has become a gathering for the other groups who are lesser educated and more prone to violence.

I heard there's a female officer assigned to the Academy who was sleeping with her married Sgt....not the first time this Officer has been seen in the bed of a married co-worker....oh and Command Staff knows of the violation but refuses to discipline either party

Academy role model officer name is katie Schwartz and was not her sgt but ceu/helicopter sgt Anderson I'm told.

For 20-years every year we pack a million drunk rednecks into Charlotte Motor Speedway yet I am unaware of any shootings that have ever taken place there.In all fairness, most of them are unconscious by sunset.

the tent on college street was a pot party. off duty officers were not allowed to enforce. ABC confiscated over $20k in liquor.
CMPD blocked the street for nicki ménage who got to the event then immediately left.
noise ordinance not enforced.
dignitary protection for p diddy and others was on duty for dignitary protective folks

I heard Sgt Anderson's wife caught them in the act...