In Defense Of Cam Newton

I never thought I'd sit down with a cup of coffee and suggest that Cam Newton was being unfairly maligned. But here goes.... 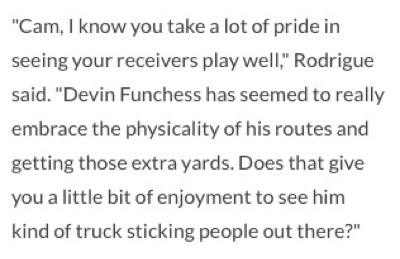 Cam didn't do the right thing which would have been to say YES, and move on with the next question. Instead he smiled, laughed, looked down, looked around and said:
"It's funny to hear a female talk about routes like.... it's funny"
Then he added "But, uh, Fun (Funchess) is coming along."
And with that the internet went crazy, twitter exploded, the NFL made a statement, the Panthers made a statement and Cam Newton became the poster child for "mansplaining".
I don't think Newton's response was pure snark, but rather surprise at the question as in damn well....
Sort of the Megan Fox moment in Transformers where she says "pop the hood" fixes the Camaro and it starts, leaving most guys thinking "Damn".
However, also as this point as the presser moved on, Rodrigue was steamed and she chased Newton down to address what she saw a major affront to women journalists.
According to Rodrigue the conversation was not taped but she says she asked Cam "if he really didn't think a female could understand routes".
Newton replied that she wasn't really seeing specific routes when watching the game, she was just seeing if someone was open. She went on to argue that he didn't know what she saw or how hard she had studied football, and that maybe the two of them needed to have a deeper conversation.
Newton said that maybe he should have said it was funny to hear "reporters" talk about routes and that if she actually did know about them, then she knew more than most reporters; gesturing towards the locker room still filled with media types.
Not satisfied with Newton's "mea culpa" she ended by asking Newton - whom she had introduced herself to on the first day of her employment with The Observer in October 2016 - if he knew her name after she had cover the team almost every day for the past year.
Newton admitted, he did not.
"Jourdan Rodrigue, Charlotte Observer." she said and then turned and walked away.
So once again in the world of the perpetually offended the collective "we" have to be bombarded with what an evil person so and so in this case Cam Newton is, how women have it so bad and the inevitable comparisons of Cam Newton to Donald Trump.
But its Rodrigue who made the unforced error by violating journalism 101 "cover the story don't become the story". By going all "Diva Ninja" on Newton she failed at her job which is to tell Carolina Panthers fans how the team looks going into Sunday's game.
As Jeff Taylor pointed out Rodrigue is the same woman who has played the "girl card" before once telling a player she had earned an interview because she had to "chase after him in heels".
CP has known plenty of media type women, nearly married one, until I came to my senses. Newton, knew he'd stepped hard in the poop and a better man could have turned the entire situation to his own advantage.
Make a woman laugh and she'll love you forever, laugh at her and you best sleep with one eye open.
Cedar Update: turns out Jourdan Rodrigue is a racist?

Charlotte Observer reporter Jourdan Rodrigue posted an apology on Twitter after three tweets she posted years ago were discovered by Black Sports Online.

In two of the tweets, Rodrigue referenced laughing at racist jokes. In the third she uses the word “nigga.”

“I apologize for the offensive tweets from my Twitter account from 4/5 years ago,” Rodrigue said today. “There is no excuse for these tweets and the sentiment behind them. I am deeply sorry and apologize.”

So not only are you a racist bigot but you are also a pig who thinks women are stupid and can't understand football?

Jordan Rodrigue is the best sports reporter the Observer ever hired.

Hate women much? Did your mother not change your diaper enough?

Cedar you're right she made the story about herself took to twitter to "express her outrage" and killed any chance of ever having a good interview from Cam Newton. Sort like running to mom because your big brother didn't want to play with your doll house. What a twit!

Cedar, you know Jourdan isn't even close to Megan Fox what's wrong with your eyes!

What the hell is physicality of a route? What does that mean? A receiver can't get physical on a route or he will be called for offensive pass interference. See the Patriots, who were called twice for that in the game. You can get physical after the catch, but not before. What was she even talking about?

This is from the reporter who said Shaq Thompson would be a starter one day, even though he has started most of the games he has played. She wrote that Tyler Larsen sat on the bench as 3rd string center before he got his opportunity to play, but he was sitting at home, not on the bench, as an unsigned free agent when we picked him up in Nov. '16 when both our centers were ailing, and he started the next week.

She wrote, glowingly, about new NASCAR driver from Mexico, saying he was the only foreign born driver, yet DJ Kennsington was born in Canada. Guess that didn't fit the narrative.

She is not that great of a sports reporter.

The Observer doesn't hire reporters any more they just put out a job and then accept the low bid offer.

And here's your proof.

Jourdan is not a sports writer she's a general assignment writer, in the same vein as that Feel Good Christen on WBTV.

I'm not saying she's bad, I don't think Cedar is either but she's way out of her league.

Cedar is right way over reacting glad he's not going the "Slam Cam" show. Wasn't needed and she needs to stay off the team bus.

He's lost a sponsor Oikos Greek Yogurt not sure that's a big hit but that's really money. So now Miss Overly tempera"mental" has cost him real money. Next a five game suspension?

Ms Rodrique is an idiot. She not only exposed herself as an immature racist, but also threw her family under the bus.
Under the same guidelines that got Ms Eschert fired, Jourdan should lose here job at the Disturber. If not, it appears the Disturber is happy with white supremiest views on their staff. She'll never be respected by the 75% blacks she'll interview, and always in the back of their minds will be the voice telling them a empowered white women is more important than a 21st Century black man. Thanks Observer for exposing your bias against black men.

A sports reporter?? Thats a bit of a stretch. Hopefully her cookie making skills are better...

guess Cam is being punished for not taking a knee

Jourdan is one of those girls that was super hot in high school but hasn't aged well. Not that she's old which is strange. She's cute enough but google her college photos at one time she was smoking. Now sort of frumpy. Wonder what happened?

About Cam, anyone who has heard her talk can understand why Cam cracked up, her voice is kinda shaky it like she's nervous but I think its just the way she is. As soon as she starts talking you just want to laugh she like that really fun girl at a party telling jokes she's just easy to laugh with. Not good for television or radio but great for print.