And then there's this guy, we all know the type, total ass clown just looking for confrontation, trying to provoke a couple of CMPD Officers. 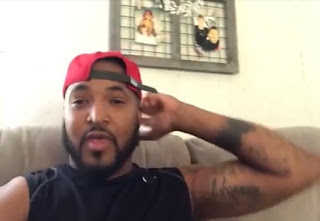 In this case his gripe is over the Charlotte City Ordnance that says you can't carry a weapon on city property. In other words he's looking for a fight over nothing.

After losing the battle six months ago our TAC decides he's going to post the video and threaten to expose the two "undercover" officers via Twitter:

"Because of their actions in the video I will be placing these photos all over your city. Their undercover days are over. If they choose to continue undercover after I post these bills all over CHARLOTTE they do so at their own risk." 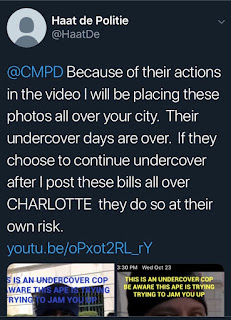 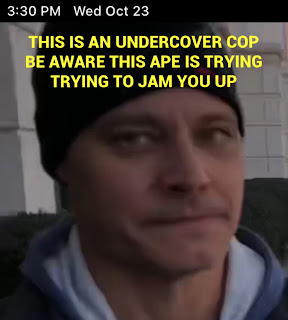 Cedar's Take: I don't know how real any of this is, since it is hard to be "undercover" with a weapon strapped to your thigh. Plus the people these two CMPD Officers are trying to blend in with aren't very likely to have an iPhone or a Twitter account.

Thanks to CP readers this idiot has been ID'd as DJ Raheem Geer of Campobello, South Carolina.

Seems Geer who has a habit of trying to "JAM UP" LE, made his first attempt in January of this year and then returned in March for his second attempt. Actually it took him two attempts on March 3, 2019 to get arrested. The misdemeanor charge for violation of a city ordinance was later dismissed.

You can read WSOC's report on the arrest back in March here.

Here's the real trouble this idiot will be back if not soon then expect him to return for RNC 2020.

He gives a bad name to 2nd Amendment supporters, and because he insists on open carry he is also making a huge target of himself.

One Final Word: About CCW in North Carolina, if you're open carry as many of us have done for years your either a "good ole boy" or lazy or in my case both.

Guys like Geer are the reason I stopped open carry. As the state's demographics have changed so has the perception of open carry.

The argument is that the visual is a deterrent. Let's face it today's idiots are wearing EMD's and robbing banks so they aren't smart enough to think "Maybe I better leave this guy wearing a 45 alone".

So add DJ Geer to your "watch list" he'll be back.

And by all means please post a negative comment, I read everyone of those "you be a racist" comments and they really hurt my feelings.
Posted by Chip Starr at 12:06 PM

How bout we JAM Him UP? Anyone recognize this POS? Maybe know when he was arrested?

The bottom photo appears to be DJ Raheem Geer. He's been arrested at HQ before while "exercising his rights."

Yep that's DJ Geer he lives in South Carolina runs around trying to piss off Officers. I think he tried that shit in January and then twice in March. Case was dismissed unless I'm mistaken. Not sure why the mofo would tweet that out now. Maybe his snap card balance is low.

Back in the day this POS would go for a ride downtown the long way, hands cuffed behind his back and spend an hour sliding on a freshly armor-all'd bench seat. Then we'd drop him off at Carowinds and tell him "have a nice day".

Fucking instigators like the Moorish Nation fools as long as the courts let them off with a slap on the wrist they will keep doing this shit. Does this fucker even have a job?

Of course he failed to mention that he was wearing a hood over his head and a mask covering his nose and mouth as he walked through.Because that is absolutely how a law abiding citizen exercising their 2nd Amendment Rights dresses and approaches LEO... Show up to a school or shopping mall looking like Active Shooter Exhibit A and those places will lock down immediately. But show up to a Police Department like that and you become a youtube hero... We clearly are living in the "UPSIDE DOWN"

Hey cedar, don’t let this one slide by you. Homicide 91 tonight on Little Rock Road. Gang member intentionally struck by a truck.

Also, what's up 2 police cars crashing into each other. How stupid is that? Did you not see the other flashing lights and sirens? I'm guessing they weren't wearing seatbelts, either. That precinct is about to lose half their shift, due to unawareness.

1508 Hours: I have been working in U-City for years. That is pretty dumb to drive a police car into another police car at an intersection. Nothing surprises me around here. Nothing.

I wouldn’t go around offering up your tenure in UCD as proof of your policing knowledge.......

1834hrs must be Officer Acosta lol

Those dudes aren't even "undercover"! What a joke...not sure what he feels like he's exposing here?

Guy is such a piece of shit trouble maker causing shit for people minding their own business. Scumbag