A change in the weather?

Despite Public Defender Norman Butler's courtroom pleas, Demont Forte had his bond yanked and he was taken into custody in the courtroom by Mecklenburg County Sheriff's Deputies this afternoon. 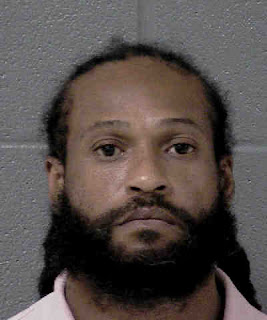 Demont Forte 5/24/2021 Courtesy MCSO
It was not clear what swayed Mecklenburg Superior Count Judge W.R. Bell but it is possible the attack on a female motorist was a little too far over the line.
Cellphone video of Mr. Forte's attack on the female motorist went viral back in April and he'll have to answer for those charges on September 1st.

The next hearing date on the weapons and drug charges is August 30, 2021 but there's a chance Mr. Forte will bond out at some point in the near future. However, the Habitual Felon team has apparently taken notice of Forte and if you're a defendant they are not your friends.

The prior posts on Mr. Forte are here:

Interesting to note that CMPD like many in the Law Enforcement community classify road rage as a "targeted attack" and that the general public is not at risk. Nothing could be further from the truth. These are random attacks on random motorists by violent criminals that perceive the smallest, slight or in many cases no reason at all to attack someone in a violent  manner.

These people are a menace to all of society. Anyone can be a victim of their rage and prosecutors and judges owe it to civil society to see that these people are permanently incarcerated and their driving privileges never restored..

Forte should be let out on Vi's doorstep in Southpark.

It will be interesting to see if DA Merriweather makes this case a priority. In Texas Forte would have been given his last meal already. These liberal idiots don't get it but this is proof that not all black lives matter and some just can not conduct themselves in a civil manner. Frankly this mofo needs to be put down ASAP!

Until the tide turns and we go back to allowing the police to do their job and the courts back them up it is only going to get worse. The liberals will continue their stupid everything is racist message until some city council member's daughter is raped and killed by one of Vi Lyles free pass cause he's black thugs.

Bet this mofo is out by the weekend. McFadden will let him out for being a victim of racism.

1032: how is this racist? This male levelled a woman out of her shoes. I can't tell what race the lady is, and it doesn't matter. Add in his horrible record, and he is a wild dog that needs to be tamed, behind bars, for a long, long time. And if he cannot calm himself down, he has no place in society.
The blind scream of racist over anything that calls out the race that is responsible for a massively disproportionate amount of crime in your city is not racist, it is fact.
So, if a white lady buried her 4 year old daughter in her yard, do you think there would be a massive outrage? There generally is when this type crime occurs. But today's news, the perp doesn't fit the narrative, so that story will go away quickly.

So what is your remedy? Would reparations fix everything for this monster? How about affordable housing, or a 'living wage'? Would it have allowed him to just shrug off a bad driving experience and not feel it necessary to lay out some innocent woman? What would you think if this were your aunt or grandmother? As someone pointed out, this guy WAS standing in line behind your loved ones at SouthPark this weekend. Locking him away is only a good start, but I really doubt that will happen, given the DA's record.

Maybe when he gets out he will meet up with the right person and the problem will be solved in the right way! Why isn't BLM protesting this? This incident had nothing to do with racism!

He is no longer a criminal, he is a "Customer"!

Maybe if the right violence interrupter and social worker were present this whole thing could have been avoided and with a pleasant conversation a suitable outcome could have been achieved without racist white police having to use violence against another customer just out enjoying his day!

Imagine how many times this beast has assaulted someone without a video witness? This is the guy who ruined people's nights at Epicenter. Well, him and about 1,000 of his distant relatives. As they say, this is why we can't have nice things.

What is Sgt. "Flip flop" McGarity and his perpetual light duty shorts up these days?